Dr. Barry Doyle Harris will be 88-years old next week. Born on December 15, 1929, he has lived one year for each one of the 88 keys on the piano, his musical vehicle—a vehicle that he uses to transport his listeners to jazz paradise. I will let others expound on his theoretical genius, or explain mathematically why his scales and harmonies are so exquisite. I will instead share a glimmer of what has happened in my world since Barry came into my life. 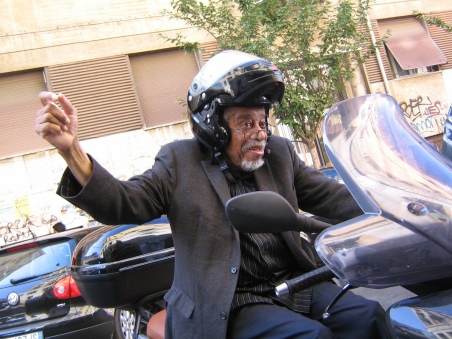 Rome – 2011 – Barry was offered a ride and turned it down, and then I said, “but Barry, how about just as a photo shoot” and he was so excited about the idea he said, “Yes, but just as a photo shoot.” Then when the owner helped him up I was suddenly very afraid — we all huddled around him, out of camera range. I was glad when he was safely back down on the sidewalk. But these photos are so cool now. I see pure joy in his face.

I will start this story in the summer of 2008, when I was still studying jazz vocals with Ulysses Slaughter. A friend from the Jazz Foundation of America’s Monday night jam sessions, pianist Richard Clements, invited me to attend the memorial of a dancer being held at “University of the Streets” in the East Village.

At the memorial, Richard was playing a beautiful white grand piano, and at a certain point in the program Barry came on the stage area and sang a song that he wrote to commemorate the lives of musicians who had passed on. The lyrics began “Who knows just when one’s life is bound to end? Perhaps it’s written in the stars…” I had no idea who Barry was but I was starstruck.

After he finished singing I was all choked-up and I turned to the people next to me and asked, “WHO is that MAN?” They whispered back something along the lines of “Oh, that’s Barry Harris. You don’t know him?” I did remember hearing his name at the 802 Union Hall, where the jam sessions were held. Some of the singers had mentioned studying with him, but other than that I didn’t know anything else about him.

Then asked them about the wonderful song he had just sung. What was the name? Where could I get it? I really wanted to sing it. They replied that they did not know the song, no one did, it was Barry’s original composition and only he knew it. I was very disappointed, but because of the strong emotions he evoked, the memory of this moment, and that touching song were all stuck in my mind. So, when two months later Ulysses was gone and I did not know where to turn to continue my jazz studies I immediately thought of Barry. I looked up his name online, found his calendar and I made sure to attend the very next vocals class, which just happened to be held at the same venue that particular week: University of the Streets.

Classes with Barry can be paid for by the class, or you can pay a yearly dues amount and get a discounted class rate. I made sure to pay the yearly dues when I arrived and the musician at the door was a bit puzzled by this. He bent his head to the side and harshly questioned me, “Are you SURE? You have never been here before, this is for the whole year.” I told him I was sure, that I needed to make a financial commitment in order to make sure I would keep coming back. He took my money.

The song that night was “Autumn Leaves” and I learned all the words, but I did not get up to sing with the other students because I was holding back tears, too raw emotionally from losing Ulysses. But the next week was a special class called “Singer’s Choice” and I did summon enough courage to get into the line and sing the first song Ulysses had chosen for me to learn, “It Might As Well Be Spring”. As luck would have it, because none of the pianists that night knew the song well enough, Barry himself accompanied me. I will never forget it. It was the beginning of a huge shift in my life and I am so grateful for him, his wisdom, his classes, his personal advice to me, and his friendship.

I am sure I will post more about him in the future as “The Best is Yet to Come” but I would like to say how exciting he has made my life–because of him I have now traveled to Switzerland and England, singing all sorts of entrancing standards and his original pieces. In Italy, I have attended his workshops in Rome and Gela (Sicily). Because of him I have met so many amazing musicians and through some of those musicians I have met others who I now work with writing songs.

If I visually imagine my life as taking the form of the number 8, then 2008 was the middle point, the twist, the pivot, the movement from the top loop of preparation, into the bottom loop of fulfillment. I do not know what is going to happen to me next, but I am sure it will be something that springs from my love of Barry and his music.

If you are not fortunate enough to own any of Barry’s albums or CDs, there are many wonderful YouTube videos that showcase his musical brilliance and many years of teaching around the world.

My favorite video is of Barry playing I Didn’t Know What Time It Was, called simply “Barry Harris Jazzpiano Solo” on YouTube. The lyrics to this song also sum up so many of the moments that I have been blessed to spend with him and the new people he brought into my life (although I will admit I know exactly what day it was, and what year it was, and where I was, and what my life was like then.)

Although it is difficult to put into words how he makes me feel when I am listening to him play, I will try and capture that emotion in future posts. He has brought so many wonderful songs and melodies into my life, and some of the cool, funny, or inspiring things he has said in passing made their way into my notebooks.  I think of these insights as “flashes” or “sparkles”, like the way a ray of sunlight randomly hits a wave in the water and it flashes in the corner of your eye and you are suddenly alert. (I call them “Barryisms”.)

I will conclude my tale today with one more reference to University of the Streets, that vortex of creative energy, I mean that rehearsal space on East 7th Street. It is no longer a jazz hub, but I have spent hundreds of joy-filled hours there over the years as it was where Barry held his Chorus rehearsals. I joined that group in 2009 and after the chorus performed with him at the Village Vanguard, he asked me what I had thought of the whole experience. I had never been to a jazz club before, never heard him play in that sort of a venue. It had been amazingly beautiful seeing him perform for an audience; So, I spontaneously said: “Oh, Barry! you were a jewel in the proper setting!”

Click above to listen to my crazy fast a capella version of “You’re a Jewel in the Proper Setting” (This is a 4-5 minute song at the regular slow tempo – this version is fast to fit it in under the 3-minute Audioboom file size limit, *smile*)

You can’t fashion a gem without making some cuts
and you’ve borne the pain of every one.
No one denies that you’ve had the guts
and now you’re second to none.

In this venue of gold and platinum you shine
creating such melodies, pure and divine
with chords that you dig from deep in the mine.
You’re a jewel in the proper setting.

Refracting the spotlight you illuminate the dark
mesmerizing us all with that magical spark,
suspending the moment, then leaving your mark.
You’re a jewel in the proper setting.

Blue as a sapphire, cool as an emerald sea,
red as the ruby that held back a tear for thee,
golden as topaz rising up like the sun,
deep purple amethyst when the night is done.

Such a precious, dear treasure, you are one of a kind
each phrase and each measure so lovingly designed,
perfectly polished, each facet defined,.
you’re a jewel, in the proper setting.

You’re a diamond, you’re a gem,
you’re a jewel, in the proper setting.