So, hello, hi there! Here is something a little unexpected, a summer “fluff” post that you will hopefully find entertaining and maybe even educational about what memories are stored in my mind. It is a list of 16 random things about me. They are in no particular order, *smile*.

1. When I worked in a corporate setting, at approximately 3 PM, almost every day, I hiccuped.  Usually just one, and then it was over.  I have no idea why.  At the office, a colleague who sat next to me always noted the time and commented on how close to 3 PM I was. (Since I began telecommuting a few years ago, the 3 PM hiccup is no more. I still hiccup now and then, but not on a strict schedule.)

2. My favorite TV program is Eastenders. “Trials and tribulations impact lives in a close-knit community in London’s East End”  I love it!  I have been watching it since 1987.  I found it on a UHF channel before I had cable – it was one of the few things I could get as reception where we were living at the time was incredibly poor.  Then I got hooked!   If you live in another country PLEASE DO NOT tell me what has happened on the show in the last 10 years as the US airings have fallen so far behind the original airings in the UK.  I’ve heard they show three or four episodes a week there and in New York City we only see 2, if we are lucky, some weeks there are no episodes aired at all.  So you see, we fall further and further behind each year.

3. When I started college, my late father-in-law, Judge Early, gave me his family piano.  It had the name “Early” hand painted in gold on the backboard (right over the middle “C”).  The thought of this special gift has become a symbol of all the support he gave me as I was finding my voice.  I was very attached to that piano and it made practicing and learning my school assignments so easy; I did not have to reserve practice rooms on the campus. I often wonder where that piano is now.  While waiting to move between apartments it was stored in a relative’s garage and before I could get it back it was sold, without my knowledge, to someone I don’t know. (Still makes me sad to think about it.)

[I have a photo of this piano somewhere in my crazy storage space, I mean my apartment, and when I find it I will insert it here.]

4. If I could drink only one beverage for the rest of my life it would be hot green tea.

5. The first “song” I consciously remember writing (which I called “Shake it Up, Baby!“) was created when I was 6 years old. I was walking home from school and I know exactly where on my street I was standing. I can still see the unique curb in my mind. I took the melody from the Four Tops’ song, “Sugar Pie Honey Bunch” and the lyrics from a box of candy I was eating at the time. I suppose the candy-makers wanted kids to shake the box while they ate candy, hence my very cool song title.

6. My most requested childhood song composition (requested by my family at gatherings) was an ode to Al Capone, that I called “Al, Oh Al“.  I was around 12-years old and for some unknown reason I was watching films and studying about him at the time. I lost all my early lyric sheets years ago, but the chorus went:

“Al, oh Al, they don’t understand you.  I tried to tell them off today, but with the reputation you have, I’m afraid I didn’t get my point across.”

The first verse talked about the Valentine’s Day massacre and then I touched on some events in his life. The last verse was just too funny:

“Tax evasion got you at last.  Nothing else could be pinned on you.  You still fascinate me, your detached attitude too.  Al, oh Al, I respect you.”

8. I live a good part of my life avoiding citrus fruits and products made with citrus, especially citrus oil. I was not always allergic to this, but thanks to a Diazinon poisoning I endured in 1987, I have become sensitive to many ordinary, typically considered nontoxic, substances. I am so glad it is now illegal in the United States to use this horrible chemical indoors. I could elaborate on the many ways I have been debilitated by exposure, and I hope that because of the new law others will have been spared my fate. I am thinking about a blog post about how allergies impact my life, maybe I will write something in the near future. I will see.

The remaining cookie on the plate contains lemon, so sad.

9. When Gerald Ford was sworn in as President I missed most of his speech as I had passed out in exhaustion from climbing Mt. Mansfield in Vermont.  I was not well-liked in my group of YMCA campers and therefore I was not allowed room in a bunk to sleep.  I lay down on the bare wood floor, my head near the radio. I did not have a pillow so I used my hiking boots; the bumpiest pillow I have ever known!  Everyone else stayed up to listen, and the next day they all made sure to tell me that I interrupted the broadcast with my snoring. (Well, you know, too bad! I was REALLY tired – it was a long hike.)

11. I once knit my husband a dark gray fisherman’s style sweater with huge cables and basket-weave stitches. It was an Elizabeth Zimmerman pattern, called “Hand-To-Hand Aran Pullover”. It was a complicated pattern and instead of the flat “zig-zag” you can see in the image of a white version I have linked here, I added a full basket-weave stitch to the front and back which made execution very difficult and so it took me over two years to complete it and a couple of pounds of wool. Unfortunately, he has never worn it, but I do have the memory of him trying it on once.

Deep sigh…I don’t knit anymore as I am focusing on my music. I had lots of the lovely thick gray wool left over. I had saved it for years but never did use it again–so, I gave it to my singing friend Connie, and she quickly knit many things from it, including a warm triangular scarf for me! (I love how it has a large carved bead at the tip of it; swings while I walk.)

12. My favorite thing in the whole world is breathing. I love breathing fresh air so much that I get a little teary just thinking about it. All my real friends know that, to me, breathing is just the best thing ever!

13. Several people in my lifetime have told me not to sing, to shut up, or not to sing jazz–that I don’t sound good doing it. Some people have tried to tell me what I should be singing because it is what they wanted to hear, or even because it was their dream to be an opera star and it didn’t work out for them so I should be an opera star. It has taken me SO MANY years to get to a place where I do not care about those negative messages. I sing what I want to now and I am a lot happier for it. (I wasted a lot of time trying to make other people happy and in the long run it did not work – they need to make themselves happy, I cannot do it for them.) 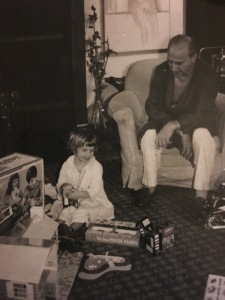 14. I love cinnamon crullers because my Papa (Grandfather who raised me, father’s side) used to buy them for me. We used to sit together in front of the firehouse in Sea Cliff and eat them out of a bag. He used to take me on day-trips all over Manhattan and Brooklyn–the Horn and Hardart’s Automat, Radio City Music Hall, Rockefeller Center, Coney Island. He always held my hand, sang funny and sweet songs to me; and was always a beacon of unconditional love.

15. I like circles and spirals, especially when they are a little quirky. Many of the patterns on the fabrics and practical items I buy have designs that include circles.

16. One hot summer afternoon, my first boyfriend, Dion, and I “cleaned” all the windows on his sun-porch with pineapple juice.  He was 5 and I was 4.  Yes, we got in some trouble over that. I feel sorry for Dion’s Mom now, it must have been horrible for her having to clean up that dried juice on so many small panes of glass.

[I also have a super cute photo of Dion and me sitting on a sofa and when I find it I will insert it here.]

I am reminded about another Dion story. A year later, I had a big fight with my neighbor (I can’t really call her a friend because we never got along, so neighbor suits her better.) We were both 5-years old, and her name was also Laurie. We fought because she said I was not going to marry Dion, she was.  He was at kindergarten that day so he never knew we came to blows over him. I heard he now lives in Australia.  Here is a photo of us; we were the “power couple” on the block! 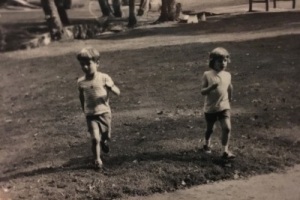